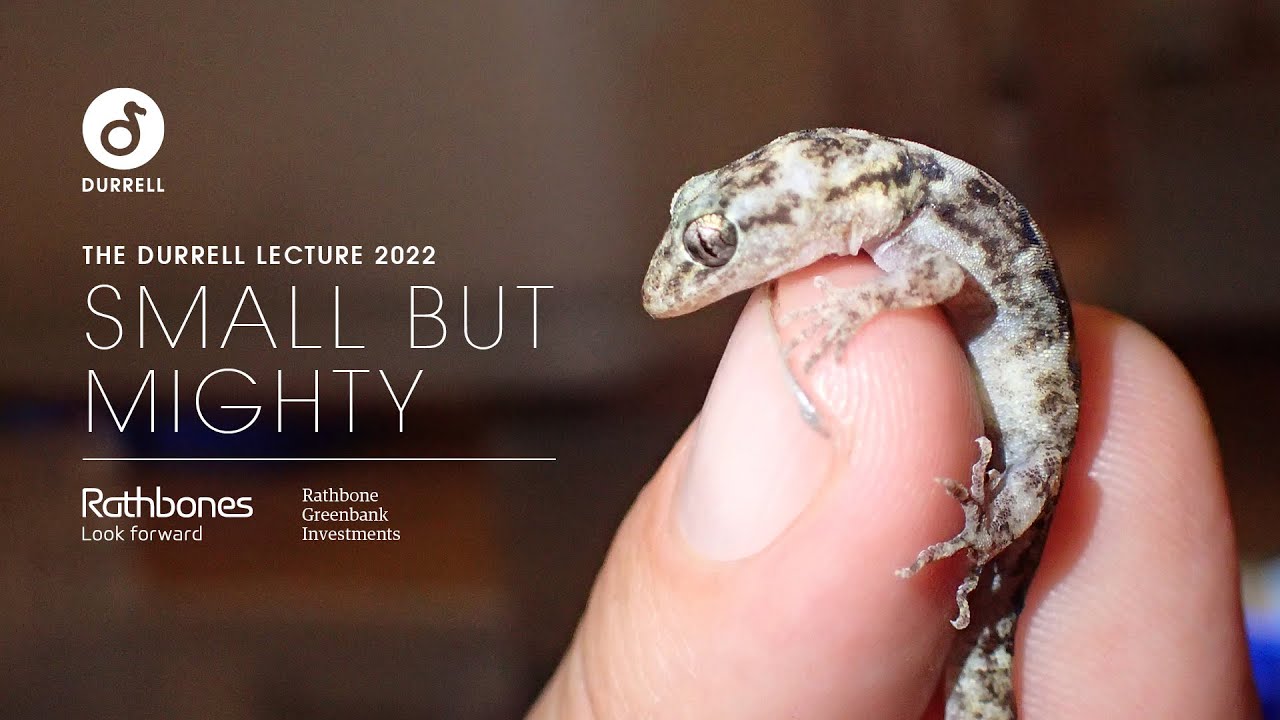 This year’s Durrell Lecture at the British Library in London featured conservationists from the Durrell Wildlife Conservation Trust and the Jean Boulle Group who highlighted the success of the emergency rescue of three species of rare reptiles, which might otherwise be facing extinction. Following the Wakashio oil spill in Mauritius in 2020 the reptiles were airlifted from the disaster-hit islands and taken to Jersey Zoo.

The Durrell Lecture entitled “Small but Mighty” highlighted the impact of lesser known and elusive species has upon broader conservation efforts and environmental outcomes. The Lecture featured Indianapolis Prize winning conservationist Professor Carl Jones and looked in detail at some of Durrell’s projects including the Saint Lucia racer, the world’s rarest snake, Mountain Chicken Frogs, a species pushed to the brink of extinction by hunting, volcanic eruptions and now a deadly fungal disease.

Durrell’s Chief Executive Officer Dr Lesley Dickie and Louis-Pierre Boulle spoke about the success of the reptile rescue and overcoming the challenges of dealing with the environmental crisis during the global pandemic lockdown.

“Durrell’s mission of ‘saving species from extinction’ has been unchanged since our inception, over six decades ago and remains at the heart of what we do today. The reptile rescue really demonstrated our approach. It was an emergency response to this devastating oil spill, which was undertaken without hesitation. We would not have been able to bring the reptiles to safety in Jersey without the support of the Government of Mauritius, Mauritius Wildlife Foundation and the Jean Boulle Group. It was great to hear this inspirational story described by Louis-Pierre Boulle given his first-hand involvement.”

“The devastating effects of the oil spill on natural reserves for wildlife in Mauritius and its islands are well known. It was both an honour to be speaking alongside Durrell with their exceptional team and a source of great pride that we were able to share our experiences as part of the Durrell Lecture this year.”

In the immediate aftermath of the spill small numbers of lesser night geckos, Bojer’s skinks, and Bouton’s skinks were captured from the southeast islands of Mauritius before a 12-hour flight which required constant monitoring to ensure their wellbeing. The reptiles arrived at Jersey Zoo where they received expert care from leading herpetologists.

The reptile rescue was made possible by Durrell Wildlife Conservation with the support of the Jean Boulle Group, together with other partners including Birdlife International and the Mauritian Wildlife Foundation.

On 25th July, the MV Wakashio freighter ran aground a few kilometres from nature reserves and national parks which are home to a variety of unique species of plant, bird and reptile. Within days, approximately 1,000 tonnes of fuel oil leaked into the pristine ocean and onto the shores of these delicate ecosystems.

Durrell has worked in Mauritius for over 40 years. Durrell’s long-term involvement in the Mascarenes exemplifies how ecosystems can be rebuilt and species brought back from the edge. They have applied their core approach to conservation action in the region with intensive ongoing operations in the field, supported by captive breeding at Jersey Zoo, and training for the next generation of conservation leaders in the region. This approach and long-term partnership with the Mauritian Wildlife Foundation to help establish protected areas, reintroduce threatened birds and reptiles, eradicate and control invasive predators, restore island ecosystems and raise awareness for species protection have been the backbone of conservation actions that have saved species over the past four decades. www.durrell.org

The first Jean Boulle Group conservation project with MWF supported restoration of the wild Mauritius Kestrel population at the property now known as “Kestrel Valley” which is home to the world’s largest Mauritian Kestrel population.  Today the Jean Boulle group is a strong supporter of conservation and anti-marine pollution initiatives. Specifically, it has worked alongside experts on reptiles in the 19 islands of the Saint Brandon archipelago and with MWF, ECOSUD and BirdLife International towards conservation and Eco-awareness in Mauritius.

The Jean Boulle Group has also been actively involved in supporting wildlife and with sustainability programs in a number of other territories beyond Mauritius including: education in conservation and replanting in Madagascar, anti-poaching initiatives in Zambia, support with BirdLife’s work on Important Biodiversity Areas, the conservation of the critically endangered albatross and extensive participation in the South Georgia Heritage Trust’s island invasive species program. A Founder Patron since 2007, Nathalie Boulle was honoured to receive the BirdLife President’s Medal in 2013 from HIH Princess Takamado of Japan in gratitude for many years of service to conservation. jeanboullegroup.com